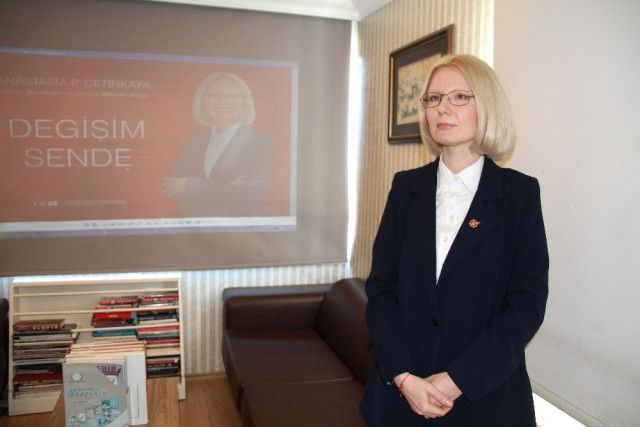 After completing her official application for 31st of March elections to the District Election Board, she gave interviews to the local reporters. Çetinkaya said she is excited and confident about her candidacy, adding that her candidacy will be good for Alanya and its residents, she has been getting very good reactions from the public.

Çetinkaya said; "Being of Russian origin is not an obstacle. Turkey gave me a lot, now it is pay-back and serve time. We're traveling, chatting with people of Alanya, talking to them. I received positive reactions for my candidacy and our campaigns are very intense. I believe we can make Alanya a brand. We can make Alanya a big tourism center as well as a richer and more efficient district. I think there are a few problems in Alanya. We need to solve them. For this reason, I became a mayor candidate. We believe Alanya has potential and we will work on it."

In addition, Çetinkaya mentioned about her projects and added: “There are three main points in our program: Improvement, Efficiency and Sscoring. We will start to explain our projects in our social media accounts as soon as possible. We have more than 40 projects. Joining the election is not a new idea. I've been preparing for local elections for the last 3 years. We have been preparing projects and services that have not been done in the city before.

Who is Anastasia Petrova Çetinkaya?

Political scientist and journalist Anastasia Petrova Çetinkaya was born in 1983, in Murmansk, a port city on the Barents Sea in the far northwestern part of Russia. She had taken Turkish citizenship last year after getting married in Alanya where she has been living for 8 years. She graduated from two universities in Norway and Russia. Çetinkaya who contributed greatly to the promotion of Alanya on various platforms works as a project development specialist and speaks 5 languages.