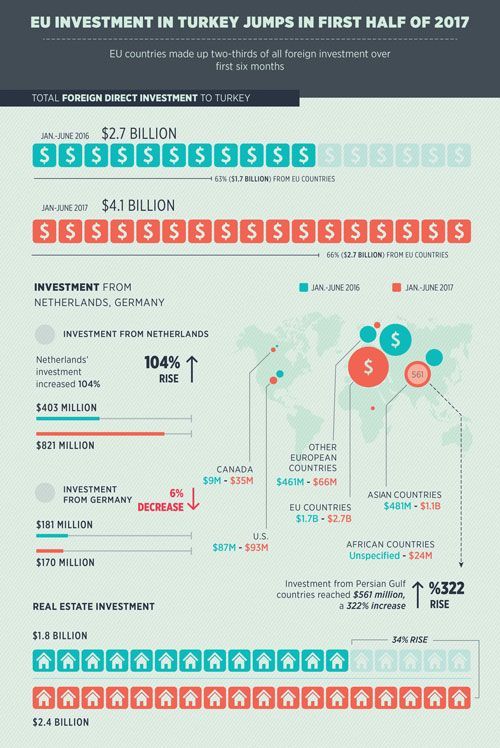 As European Union politicians consider suspending talks with Turkey on its long-held dream of joining the super-state, newly released data this month, ironically, shows that Europe is still the largest investor in the Muslim nation.

Turkey's national news agency, Anadolu, illustrating the close economic bonds between the two, revealed that in the first six months of 2017 direct investment inflow from the EU rose to 2.719 billion USD. This was a 61 percent increase on the 1.69 billion USD achieved over the first half of 2016.

A total of 4.1 billion USD flowed in from abroad into Turkey from January to June 2017, with around two-thirds, or 66 percent, emanating from Europe. Overall foreign direct investment increased by 50 percent on last year.

Germany, the Netherlands and the UK have all had a significant say in the international cash inflows into Turkey.

Of 55.639 foreign companies operating in Turkey funded with outside capital, just over 22.000 are from EU countries. Nearly 7.000 are German-based; 3.011 from the UK, while the Netherlands claims third place with 2.737 companies.

From January to June 2017, the Netherlands registered the biggest jump of all 28 EU states in investments in Turkey, spiking at 821 million USD, a 104 percent increase from 403 million USD on the same period in 2016.

One of the biggest risers in funnelling foreign investment into Turkey in the first six months of this year has come from the Asian continent. Investment inflows amounted to just over 1.140 billion USD, a 138 percent improvement on the 481 million USD in 2016.

While the Middle East has been embroiled in a dispute with Qatar, with Turkey as its primary advocate, cash inflow has remained unaffected. Turkey saw 561 million USD inflow, a 322 percent rise, from the Gulf States.

In comparison to the EU, the Middle and Near East countries have 19.184 companies set up in Turkey.

Other Nations Investing in Turkey

Resources from a diverse range of countries have flowed into Turkey in 2017, with $24 million from Africa compared to zero in 2016, and 128 million USD from the US and Canada as against 96 million USD previously.

The Turkish government's stimulus programme, such as incentives for foreign investors, has attracted resources from many countries, helping to bolster the economy.

One such element was the scrapping of VAT on first-time investments by foreign property buyers. Introduced earlier in the year, the government has extended the incentive to the end of September.

Anadolu Agency reported that foreign investment paid into the real estate sector rose from 1.8 billion USD during January to June 2016 to 2.424 billion USD in 2017, an increase of 34 percent.

During the January to June period, foreign investment funded 2.429 new companies and joint ventures. A total of 93 firms in property renting, construction, retail and wholesale, were created domestically and attracted direct foreign capital.

More investment could soon be flowing into Turkey in the second half of 2017 after announcements revealed a new joint venture between Turkey's Azure Group and one of Qatar's biggest families.

Under the new name, AzureMana, the company could eventually boast up to 5 billion USD in Qatari money, with capital flowing into Turkey into such diverse sector as food, real estate, manufacturing and construction.

Turkey is the seventh biggest destination for Qatari capital, but that is expected to rise even further thanks to Turkey's stance of backing the Gulf nation in its current row with other Middle Eastern neighbours.

Qatari investments in Turkey accounts for 18 billion USD, with some of the biggest acquisitions including shares in banks, such as Akbank and Finansbank, and the purchase of Turkish satellite provider Digitürk by Qatari broadcast giant being Media Group for 1.4 billion USD.

Ties between the two countries were underpinned further by bilateral trade talks in Izmir in August, drawing 90 businesses from Qatar and 150 company representatives from Turkey. Further dialogue between the countries' commerce sectors is set to take place later in 2017.